An American Opera: The Greatest Pet Rescue Ever! 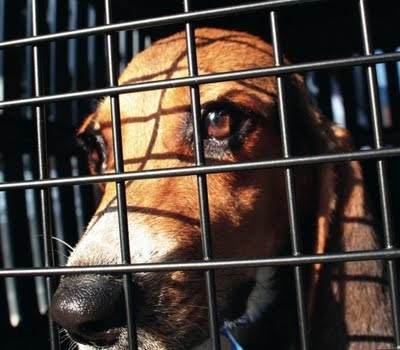 One of the few unexamined aspects of the bureaucratic bungling that made such a disaster of Hurricane Katrina is what happened to the pets refugees were forced to leave behind. That’s the subject of An American Opera: The Greatest Pet Rescue Ever!

Producer/director/narrator Tom McPhee went to New Orleans a few days after the storm to help. He wound up photographing rescued animals at a central holding area, as part of an effort to reunite pets with their owners. McPhee brought along a video camera too, and the footage he shot at the processing facility became part of An American Opera.

The greatest strength of this sometimes overwrought piece of citizen journalism is its often emotional immediacy. We see people rescuing dogs or breaking into houses to find them dead. We meet some of the volunteers who do the bulk of the rescuing, including a couple who came all the way from Canada. And then there are the animals.

Sad or scared, friendly or reserved, and almost always touchingly compliant, the dogs – the movie never gives us statistics on which species were rescued, but it looks as if nearly all of them were dogs— gaze into the lens and straight though to our hearts. Like their owners a few days before, they’re rounded up, processed, and herded onto planes, confused and alone in a strange new world.

The lack of a coherent plan makes it impossible to rescue all the animals people had to leave when they were evacuated. Volunteers provide much-needed help, but they also add to the confusion. That chaos is compounded – as it was for Katrina’s human victims – by fear, firearms, and a bureaucratic focus on controlling than on helping the victims. It’s chilling to hear the head of the Louisiana SPCA talk about the abandoned animals they’re “trapping.”

McPhee does a good job of retracing the infighting between officials and volunteers in the weeks after the storm, as differing aims and philosophies lead to friction and finger-pointing – not to mention the suffering and deaths of hundreds, maybe thousands, of animals.

He avoids showing that suffering in too-graphic detail, for the most part, though young children and the especially tenderhearted should probably steer clear of this movie. The hardest parts to watch involve two mass killings of dogs by law enforcement officers.

One of these stories is narrated by Christopher Acosta, an admirable young man who has clearly earned the right to his School of Hard Knocks T-shirt. Acosta rescued his own dogs, then commandeered boats to save scores of his neighbors before he was evacuated and forced to leave his own surviving dog behind. After all that, he returned to the school where his dog had been left with many others, only to find they'd all had been shot by the law enforcement officers in charge. His telling of that story, and McPhee’s footage of its aftermath, are powerfully matter-of-fact.

But the strength of those moments is diluted by the haphazard structure of this inchoate movie, which sometimes feels as chaotic as the situation it describes.

I kept wondering just what McPhee was trying to achieve. A challenge at the end indicates that he wants to mobilize people to action. But if so, what does he want us to do?

Does he just want us know what a great guy he is? Unfortunately, there’s enough self-promotion in here to beg that question – especially early on, when he keeps breaking into the story with his breathless voiceover to say things like: “If I ever had a time in my life to do something really important and unique and to help out, this was it.”

Or is he trying to use this story as a metaphor for something larger? In the first of several endings, McPhee dwells on the costumed dogs at a Barkus festival in New Orleans, which seems to be a kind of canine Mardi Gras. He says that event proved to him that the city would survive, but it’s never clear to me just what Barkus is or why he finds it so significant.

He also highlights a statement by a photographer who says you can measure a society by how it treats its animals. True enough, but the thing about Katrina is, you don’t need to show what happened to its animals to get to our failure as a society. All you need to do is look at how the people were treated.

The abandonment and botched rescue of Louisiana’s animals after Katrina was, as one of the movie’s subjects puts it, “a disaster within a disaster.” A shame and a tragedy on its own terms, it doesn’t need to be compared to anything else. That’s why what stays with you after watching An American Opera is not the hyberbole or the rebel rock or the garbled calls to action. It’s the quiet dignity of all those stranded dogs and cats.
Posted by Elise Nakhnikian at 11:31 PM

I bought this poster in a used bookstore in Corpus Christi in the early '80s. It may have been the best 5 dollars I ever spent; it's been up every place I've lived in since. Click on the poster to read more.

Elise Nakhnikian
Most of these pieces first appeared either in Brooklyn Magazine or its now defunct sister publication, The L magazine, or in Slant Magazine or its blog, The House Next Door. Here's what I've written for Slant and THND.