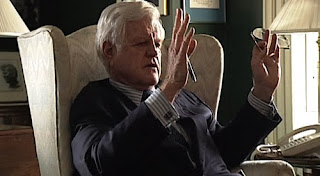 Another documentary about the foiled fight for U.S. immigration reform from How Democracy Works Now, Last Best Chance delivers the message that was missing from the other film from this series that's playing at the Human Rights Watch festival. Mountains and Clouds zooms in so tightly on the macro view of the fight to pass or derail a relatively small piece of legislation that we never learn what motivates the fighters, but Last Best Chance takes the wide-angle view.

Directors Shari Robertson and Michael Camerini and editor Jane Rizzo lay out the stakes this time with admirable clarity and impact, starting with a prologue that explains the need for immigration reform. The filmmakers aren't above using Power Point-style lists or that honeyed, voice-of-reason voiceover that I found so annoying in both films, but they don't resort to those often. For the most part, they stitch together powerful snippets of conversation, speeches, and lectures by eloquent and impassioned people.

The bill being debated this time around is the mother of them all: comprehensive immigration reform. The film starts with the debate over the film introduced by senators Ted Kennedy and John McCain in May 2007, then follows the fight as it gets really down and dirty after the right-wing Republican talk-radio and TV talking-points machine shreds its basic premises. (Sneering at the bill's effort to bring undocumented immigrants "out of the shadows" on Bill O'Reilly's show, Ann Coulter says: "Who cares if they're living in the shadows? They're illegal!")

We also hear from political heavy-hitters like then-Senator Barack Obama, Hillary Clinton, Lou Dobbs, and a kinder, gentler McCain, who reads from a newspaper account about the terrible deaths suffered by undocumented workers in the Arizona desert. But the star of this show is Kennedy. Visibly weakening as shooting progresses, though no mention is made of his illness, he's the white-haired knight credited with having "made us a multi-ethnic, multicultural society" with the immigration bill he championed in 1965, an effort he is determined to build on now.

As in Mountains and Clouds, the filmmakers are good at detailing the politics involved, making even wonky stuff like cloture and "killer amendments" easy to understand. And once again, they get excellent access to key people, though only on the pro-immigration side. I got a little backstage thrill from listening to one of the activists, whose constituency gives him some clout, though he has no official role in the debate, telling Karl Rove "you have kicked our ass from one side of the room to the other" before trying to win back some of the ground the outnumbered Republicans have stolen out from under the Democrats. I'd say that's a pretty vivid lesson in how democracy works now.

They also capture a few small-scale moments that hint at the toll the fight takes on the people involved, like when one of the activists puts her very young-sounding daughter on speaker phone to talk about when she'll get home. "Um, well, there's another big vote at 7:30 tonight," says the mom. "Okay. Well, do you think you can maybe watch it from home?" asks the daughter, who's clearly an old hand at this negotiation.

By this point in Last Best Chance, there's no question why a mother would sacrifice dinners with her daughters for the fight over immigration reform, which the filmmakers and their subjects see as nothing less than a fight for the soul and the future of our nation. The directors couldn't resist ending with one of their pious voiceover comments, but I think they could have ended with New York Senator Chuck Schumer. Speaking to the press after the bill was defeated, he says: "When you study why great countries fail, it's because they're unable to deal with the problems facing them. They devolve into petty little disputes and appeals to the lowest common denominator, and those prevail."

Written for The House Next Door
Posted by Elise Nakhnikian at 9:04 PM

Email ThisBlogThis!Share to TwitterShare to FacebookShare to Pinterest
Labels: A Movie a Day, Movie Reviews

I bought this poster in a used bookstore in Corpus Christi in the early '80s. It may have been the best 5 dollars I ever spent; it's been up every place I've lived in since. Click on the poster to read more.

Elise Nakhnikian
Most of these pieces first appeared either in Brooklyn Magazine or its now defunct sister publication, The L magazine, or in Slant Magazine or its blog, The House Next Door. Here's what I've written for Slant and THND.